“How am I supposed to plan an Ed conference if I have never been to one?”

It was my first thought after the role of “Conference Manager” was bestowed upon me. I maintain that this is a logical train of thought for a woman four hours into the workforce.
It seemed like a no-brainer that the first prerequisite for being in charge of a recurring event is attending that event at least one time.

“They must not be too fond of these conferences,” my second thought quickly

followed.“Or else they would put one of these other brilliant, experienced staff members as the conference manager.”And close behind, my third thought: “Okay. Let’s do this.”

There is something about being less than half of a day into your career that makes a person feel 50% completely unqualified and 50% completely on fire for the work you are doing. I would imagine it’s like being hired to write for Saturday Night Live with an application that says “dabbles in knock-knock jokes”. You don’t know how you got there, but you’re going to rock it until they figure out their mistake. 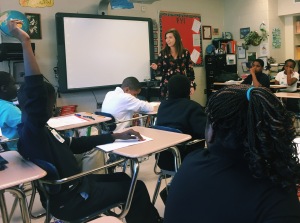 My first step down the Yellow Brick Conference Road was to talk to anyone that had been to a conference. Students, teachers, venue staff and volunteers, we sat and talked. I asked every question from “How can we improve the effectiveness of breakout session transitions?” to “Do students write on the nametags with a pen or a sharpie?” There was no detail I thought I could breeze over. I wanted the students who attended these six conferences to feel that the experience was improving, not stagnating – and certainly not worsening.

Throughout this process of planning while learning, I heard incredible stories from stakeholders about the differences that conferences made in their lives. I anticipated these from students, but hearing them from our volunteers was unexpected. Birmingham’s movers and shakers told me about how a ten minute mock interview with an 11th grader changed how they saw Birmingham City Schools. Business experts remembered the most intricate details about a 7th grader’s five minute business pitch they heard a year ago.

Hearts were changing for people at all levels, growing

advocates for the students of Birmingham across the city. Meanwhile, even the quietest student was growing their network. They were accepting internships. They were blowing stereotypes about young people out of the water. It wasn’t that Birmingham students learned how to be impressive through conferences – they were impressive long before we ever met them.

Conferences have been that opportunity for me. It turns out that there wasn’t a mix up when I was given conferences to manage. It has been through these conferences that I have learned what I have to offer students and the city of Birmingham. I have what it takes to create meaningful, effective experiences for thousands of brilliant students. It just took the right opportunity – and the right staff of people cheering me on – to show me that.