The response to touring Samford’s campus from students in Birmingham City Schools has been overwhelming.

“I didn’t know a campus this private existed in Birmingham,” one student says.

Or: “The chapel is beautiful,” says another.

Or, my personal favorite: “I didn’t think I could go to Samford, or that I would want to, but after going there, I am definitely going to apply.”

The latter statement characterizes the response we got from almost 200 Carver freshman who toured Samford University last year as part of an College 101 expansion pilot. What started as an idea, quickly blossomed into a year-long program and the mastermind behind all of the campus logistics was Samford Director of Diversity and Intercultural Initiatives, Dr. Denise Gregory.

Denise is a native of Columbus Mississippi. She attended Jackson State University, where she received her Bachelors of Science in Chemistry. She decided to advance her education at Georgia Institute of Technology (Georgia Tech) where she received her PhD in Chemistry. Upon finishing her doctoral degree, Denise entered into the teaching field at Tuskegee University as a chemistry professor. Although she had begun her career, she wasn’t done with furthering her education. She began to work on her post-doctorate degree with the United States Department of Agriculture (USDA), in Stoneville, Mississippi. Denise began her work with Samford University in 2004, in the department of Chemistry, as a professor.

When asked about her experience working with the College 101 program Denise stated, “They were extremely engaged while they were here”, and after meeting her, I can imagine they were. She also enjoyed the activities they participated in and the reaction from the students as they experienced Samford University’s campus. “One thing that made the visit unique is that they visited our planetarium”, being that only a few universities in Alabama have that available.

Denise also engages with Birmingham City Schools students outside of her partnership with Ed. She serves as the Director of Minority Youth Science Academy. She has had students to participate from Carver, Ramsay and even students from Florida, Georgia and Tennessee. “I have a passion for recruiting minority students in S.T.E.M. fields”, Denise affirmed. She continuously impacts the students of Birmingham City Schools on her own time and with Ed: Samford also hosted students from the Academy of Urban Educators at Parker as part of Bridging the Gap, supplied student-volunteers for the College Knowledge program, and sent admissions counselors to talk about financial aid at our first FAFSA Completion Conference. 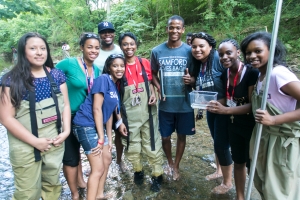 “[What Ed is doing is] refreshing,” Gregory says. “It is great to see a source outside of the system, that aren’t parents or teachers that influence the students and focus on their priorities.”