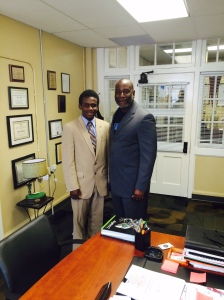 Joseph Bannerman is nicknamed “Reverend” because in addition to being an academic star, he pastors like his father and uncle before him. In a nod to the changing times, his pulpit is located on Google Plus and his parishioners come from all over the world.

This kind of innovative thinking is a cornerstone of Joseph’s daily life and one of the big reasons he has already scored a 30 on his ACT as a high school sophomore.

Before participating in weekly ACT classes as part of a partnership among Ramsay High School, the Birmingham Education Foundation, and College Admissions Made Possible, Joseph had no opportunities for ACT prep. Since August, his score has shot up 3 points, and he’s not done.

He asserts that his “goal is to score a 36 before [he goes] to college.”

Right now, Joseph is focused on Harvard, Emory, Alabama, Morehouse, and Princeton as potential next steps; once there, he plans to study political science on his way to becoming a politician and a minister. Joseph credits the education he received at Minor, Arthur, WJ Christian, and Ramsay, and the support of his family as big reasons for his success. His favorite classes are Choir and History, and he recently participated on Ramsay’s Academic Bowl team, which had its best ever finish at Regionals.

His next challenges will be as student government representative for the Junior class and in participating in Ramsay’s rigorous IB program.

“Next year, I want my writing score to improve on the ACT,” he says, and judging from Joseph’s determination and the support system around him, Ed has no doubt that the best is yet to come.